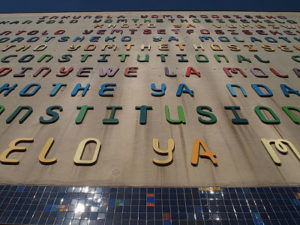 ARTICLE: SASSA – MUDDLING THROUGH AS THE POOR WAIT

The last few days have witnessed a SASSA fiasco on an unprecedented scale. Outright lies, half-truths, resignation of key personnel and a fumbling, rumbling and grumbling Minister trying to save herself – and not the almost 17 million grant beneficiaries – was the order.

Wide media coverage delivering blow-by-blow accounts of the unfolding crisis has elicited outrage, yet President Zuma has the temerity to ask Ministers and their spokespersons to stop talking about social grants. In an interview from Jakarta, Indonesia, he said, “I think Ministers should stop talking, including their spokespersons. I think the point has been made. The less we talk, the better”. He added in response to public outrage and a call for Minister Bathabile Dlamini to be sacked that, “there are people speaking as if the date has come and passed and that the Department has failed and the Minister has failed. But the date has not come”. President Zuma, unlike the almost 17 million grant beneficiaries, is assured of where his next meal will come from. He is assured – as is evidenced by the State Capture Report – of wealth accumulated for himself and his family, but a key voting bloc remains in limbo.