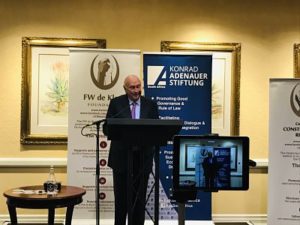 SPEECH: THE 25TH ANNIVERSARY OF SOUTH AFRICA’S HISTORIC CONSTITUTIONAL TRANSFORMATION: DEFENDING THE CONSTITUTION AND LOOKING TO THE FUTURE

It is a great pleasure for me to welcome you to this celebration of the 20thanniversary of the FW de Klerk Foundation in conjunction with the 25thanniversary of the New South Africa.  I should like to share a few ideas about the process that led to the establishment of our constitutional democracy – and then to say a few words about the work of the Foundation. 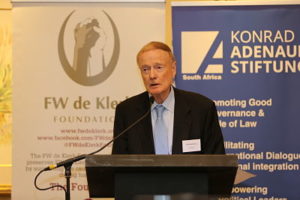 I am really honoured to have been asked to speak on this occasion, celebrating the 20th anniversary of the FW de Klerk Foundation and the 25th anniversary of true democracy in South Africa. Apart from its founder, I would like to pay tribute to the contribution David Steward and Dr Theuns Eloff have made to the Foundation and the leading role it has played in defence of the Constitution.