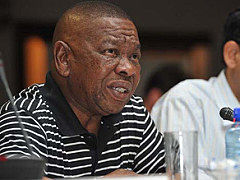 ARTICLE: BLADE – AS SHARP AS EVER, AND JUST AS DANGEROUS

In a recent memorial lecture to Oliver Tambo, the now former Minister of Higher Education, Blade Nzimande, lifted the veil on how the SACP sees and understands the source of the current state capture. The news headlines claim that at its core, his speech speaks of a country in the early phase of a securocracy. However, that is not at the heart of his speech. It is Nzimande’s first speech after being dismissed by Zuma, and he is doing his analysis of what went wrong, holding Tambo up as an example. This analysis brings some interesting, and some troubling, issues to the fore.

It is important to remember that the SACP leadership was instrumental in Polokwane in 2007 in toppling Mbeki and voting Zuma in. Zuma rewarded them for this with a disproportionate number of Cabinet posts. This allowed them to further the SACP and ANC’s National Democratic Revolution (NDR), among others by smuggling socialist elements into policy (such as the draft legislation on property rights).