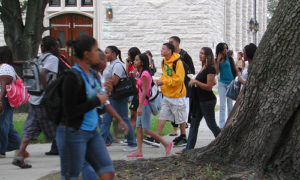 ARTICLE: SOME THOUGHTS ABOUT YOUTH UNEMPLOYMENT ON WORKERS’ DAY

Workers’ Day provides us with an opportunity to assess the nation’s labour relations and the degree to which our economy is succeeding in its responsibility to provide jobs for all our people – and particularly for our youth. We are confronted with the reality that, according to a recently released Statistics SA report, The Social Profile of the Youth, 2009-2014, approximately three-quarters (3.4 million) of the more than five million unemployed South Africans in 2014 were youth (aged 15–34 years). This alarming statistic requires an honest introspection into South Africa’s current modus operandi in the labour arena and calls on us to confront the failures that are crippling our ability to create an inclusive and prosperous South Africa – particularly for our young people. There are four obstacles to solving the youth unemployment crisis.