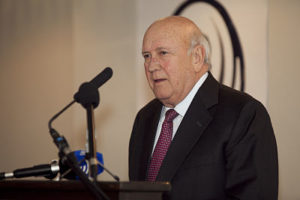 LETTER: FW DE KLERK TO THE TIMES OF LONDON

Letter first published by The Times of London

It is regrettable that the “Rhodes Must Fall” folly has spread from South Africa to Oriel College. My people – the Afrikaners – have greater reason to dislike Rhodes than anyone else. He was the architect of the Anglo-Boer War that had a disastrous impact on our people. Yet the National Party government never thought of removing his name from our history.