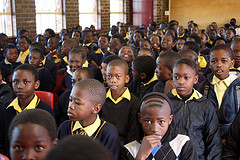 The Gauteng MEC for Education, Andrek Panyaza Lesufi, is an interesting man. A large part of the mainly black population think the world of him. He is a MEC who is “hands-on”, and is seen and heard wherever there is trouble in the Gauteng school system. He is regularly in the media and holds a press conference once a week – usually on a Sunday afternoon at his home. He was even mentioned as a possible successor to the current Basic Education Minister, Angie Motshekga. Another part of mostly the white (and Afrikaans) population is of the opinion that he is waging war on Afrikaans as a language of instruction in schools – and in addition to that, harbours anti-white sentiments.