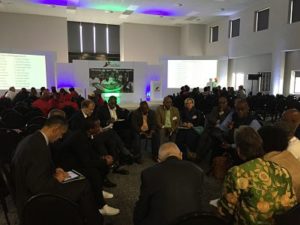 ARTICLE: IS DIALOGUE EXCLUSIVE OR INCLUSIVE?

The eight Foundations’ National Dialogue Initiative (NFDI) was successfully launched on 5 May in Johannesburg. The vast majority of the 300 people – from all walks of life and racial groups – who attended and participated in the group discussions, viewed it as successful. It was indeed a historic initiative and the spirit was one of shared and straightforward talk about our common future. The agenda of the future dialogues was determined by group discussions whereby topics that will be discussed nationwide over the next two years were identified. The next step is to have launch events at a provincial level.

First, 40 EFF members (mostly young people), fuelled by a Tweet from one of their leaders that dialogue with FW de Klerk and his Foundation was unacceptable, stormed in after lunch after breaking through security. Initially they stood around because the NFDI was just dividing into small groups. The EFF members even accepted an invitation to form their own group and put their issues on the agenda. However, when they realised that their leader’s Tweet did not command cooperation and dialogue but rather, disruption, they refused to give feedback on their discussion.