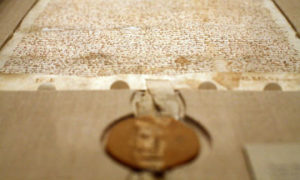 800 years ago, on 15 June 1215, in a plashy meadow beside the River Thames in England, an event took place that would deeply affect the constitutional future – not only of the English people – but of countries throughout the world, including South Africa. On that day King John was forced by his barons to sign the Magna Carta – a document that introduced for the first time the notion that kings – and by extension governments – are ultimately subject to the Rule of Law.