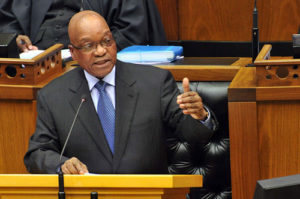 ARTICLE: THE COMMISSION OF INQUIRY AND NEC CONFIRMATION OF ZUMA’S PRESIDENCY – WHAT DOES 2017 HAVE IN STORE FOR US?

The deadline for President Zuma to appoint the commission of inquiry as per the Madonsela State Capture Report, came and went quietly at the end of November. Hours before the deadline,  the President submitted a court application to review the Madonsela Report and its recommendations. With such an action, the recommendations are temporarily suspended. He and his legal advisors apparently don’t take any chances.

His argument is that her directive is invalid because he, as per the Constitution, did not decide independently to appoint such a Commission and that only he (and not the Chief Justice) can take this action. Mr Zuma further argues that he may not be judge and jury in his own court, as the Commission would have to report to him.

The Constitution does indeed state in section 84(2)(f) that the President is responsible for appointing commissions of inquiry. On the other hand, section 96(2)(b) provides that members of the Cabinet and Deputy Ministers may not “act in any way that is inconsistent with their office, or expose themselves to any situation involving the risk of a conflict between their official responsibilities and their private interests”. Surely that which applies to the Cabinet should also apply to the head of the Cabinet.