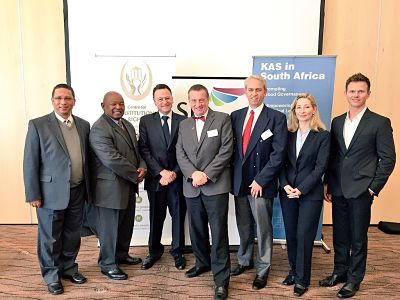 The Centre for Constitutional Rights (CFCR), in association with the School of Public Leadership (SPL) at Stellenbosch University (SU), hosted the fourth in a series of breakfast discussions for 2015 on Tuesday, 22 September 2015. The series is supported by the Konrad Adenauer Foundation (KAS).

Mosiuoa Lekota, MP and former Chairperson of the National Council of Provinces (NCOP) and Tony Leon, former MP and Leader of the Opposition in the National Assembly, discussed “Parliament, the People and Accountable Government?”