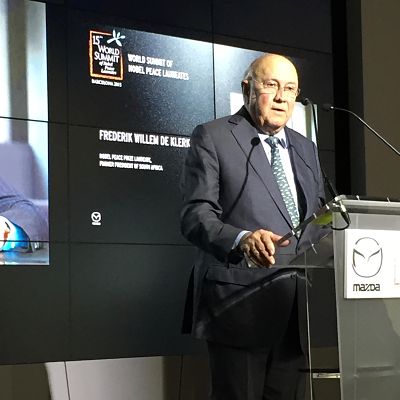 I have been asked to speak to you this afternoon about South Africa’s transition to non-racial constitutional democracy – with particular attention to the role played by communication.

Twenty-five years ago we South Africans were confronted with seemingly insurmountable problems.

By the beginning of the 80s, it was becoming increasingly clear that South Africa was on the wrong course.

President PW Botha clearly understood the need for change – or as he put it, to ‘adapt or die’.

For some years black South Africans and the international community had been vociferously demanding that the South African government should dismount the tiger of white domination on which history and circumstance had placed it.

During the mid-1980s the situation in South Africa seemed to be hopeless.

The country was caught in a downward spiral of violence, international isolation and economic decline. There seemed to be no common ground between the National Party Government and the African National Congress. Most people thought that a cataclysmic racial war was inevitable.

The South African government felt that it was running out of options. Since 1978 President PW Botha had been trying to implement reforms.

However, by then it was no longer a question of segregated park benches and integrated sports teams:  it was a question of power – or Amandla, as the ANC put it. The demand was not for the reform of apartheid – but for one-man, one-vote elections.

The Government was acutely aware of the need to assure the international community that the reform process would culminate in genuine political rights for all South Africa’s communities.

Something had to be done.

The embattled cabinet pleaded with President Botha to take urgent steps to address the situation – and to announce the far-reaching steps that would be necessary to bring peace and stability. The President agreed on the need for dramatic changes – and called for suggestions. Senior cabinet ministers submitted proposals for a historic speech.

The Foreign Minister, Pik Botha, was despatched to Vienna to meet with representatives of the United States, the UK and other leading powers to brief them on the new initiative. The American delegation was lead by Lawrence Eagleburger – whose name symbolised the essence of the US Imperium – half way between Roman imperialism and McDonalds.

In the meantime, back in Pretoria, President Botha was having second thoughts. He felt that his ministers were trying to push him into a corner where he did not want to go. He and his advisers took over the management of the project and the preparation of the final text of the speech.

On 15 August, President Botha delivered the speech to the Natal Congress of the ruling National Party in the Durban City Hall. Because of its historic importance, the speech was dubbed “the Rubicon Speech” because after it there could be no turning back.

President Botha’s real audience was, however, millions of people throughout the world – including Margaret Thatcher and President Reagan – who were eagerly awaiting his message of hope.

What they heard was completely incomprehensible. Botha was talking to his audience in the political style that had been developed over the years at South African Town Hall meetings – where forceful rhetoric was the order of the day.

The speech was an unmitigated disaster. It was the wrong venue; the wrong audience; the wrong length; the wrong formulation; the wrong style – and worst of all – the government had committed the fatal error of creating expectations that it could not possibly satisfy. It was like starting a hundred metre race a hundred metres behind the starting line.

The result was that international confidence in the country plummeted. The speech is calculated to have cost the country about three million rand – per word. During the following weeks the value of the rand fell precipitously; the country lost literally tens of billions of rands – all to a large extent because of poor communication.

The irony is that the speech did, in fact, contain an historic announcement, that the government had accepted the principle that South Africans of all races could be accommodated within the same constitutional system. However, it was hidden away at the bottom of page 11 and couched in terms that only political scientists could decipher.

Had Botha been better advised and communicated his message properly, the value of the rand would probably have risen.

The statement should have been much shorter. It should have been read from the President’s office, with the requisite bowl of flowers and photo of the family in the background. PW Botha should have looked the camera right in the eye and used the communication forms that the rest of the world understood: “Fellow South Africans, our country has come to an important juncture where it will be necessary for all of us to join hands and build a brighter future….”

The period after the Rubicon Speech was the lowest point in South Africa’s fortunes.  Despite this, the situation began to change for the better.

Within a few short years all of the major parties had reached agreement on a new nonracial Constitution – and 21 years ago, on 10 May 1994 – President Mandela was inaugurated as the first President of South Africa’s new constitutional democracy.

What were the factors that made this possible? I would like to mention the following:

On 2 February 1989 I was elected leader of the National Party after the surprise resignation of President Botha. In my first speech after my election I called for “a new South Africa, a totally changed South Africa, a South Africa which has rid itself of the antagonism of the past.”

In September, 1989 I was elected President and began immediately to take the steps needed to normalise the situation in South Africa – including permission for peaceful demonstrations and the release of imprisoned ANC leaders. On 9 November, the fall of the Berlin Wall, greatly strengthened my hand. I knew that the balance of forces would never again be so favourable for successful constitutional negotiations. History had opened a window of opportunity and we decided to jump through.

The process was launched by a speech that I delivered to Parliament on 2 February 1990 – in which I resolved not to repeat the communication mistakes that President Botha had made with the Rubicon speech.

South Africa was at that time the biggest story in the world. There was a greater concentration of international media in Cape Town at the beginning of February than there had ever been, before or since. ABC and CBS were hosting their evening TV news from Cape Town. Ted Koppel of ABC was in town, as was Dimbleby of the BBC.

They had all come to South Africa because of strong expectations that Nelson Mandela would soon be released. It was the news story of the year – if not of the decade. Better still, it was taking place during February – one of the main ratings months for US TV. The world had come to Cape Town – but they had not come to listen to my speech. They had come for the first great photo op with Mandela.

We had planned the circumstances surrounding speech with the greatest care. We did everything we could not to raise expectations beforehand. We locked the foreign and South African media in conclave some hours before the speech and ensured that Gerrit Viljoen, the Minister of Constitutional Development, was on hand to brief journalist on its contents.

Accordingly, when the journalists filed their stories they had already had a full opportunity to study the speech and to ask pertinent questions. The reaction of a leading journalist was “My god! He has done it all!”.

This was one of the secrets of the speech’s success:

The other secret of the speech’s success was that I didn’t announce the actual date of Mandela’s release. Had I announced that he would be released the following day, the rest of my speech would have been drowned out by the news.

Instead, the Government was able to keep control of the communication ball for an entire week. The foreign media – in Cape Town at considerable expense – had nothing else to report on. Then, finally, on Saturday 10 February, came the announcement that Mandela would be released the following day.

I had informed Mr Mandela the previous evening of the planned date of release. He was shocked and insisted that it should be delayed for at least a week to give the ANC sufficient time to make all the necessary arrangements. I refused – but granted Mandela’s request to be released in Cape Town rather than Johannesburg.

Even so, we almost dropped the communication ball at the last moment. My security advisers had recommended that the release should be announced simply by way of a short press statement “because the Government should not draw too much attention to the decision”!

Fortunately, wiser counsel prevailed and I announced the release at an international press conference on Saturday evening. It was immediate global news. Several of the main international networks interrupted their usual programmes to carry the announcement.

After that the communication ball passed to Nelson Mandela and the ANC – as we knew it would be.

However, during those eight days we started to change perceptions of South Africa – and opened the way to the constitutional transformation of South Africa.

In the subsequent four roller coaster years of negotiations we experienced many crises – each requiring careful and targeted communication.

We developed an approach that served us well to handle such crises.

By following this approach we were able to defuse many potentially damaging crises.

Finally there comes a time when one realises that even as President you will no longer be the most effective communicator. Such a time came with the assassination of Chris Hani, the leader of the South African Communist Party, on 10 April 1993. I realised that only Nelson Mandela would be able to call on all South Africans to remain calm. This he did in a masterful fashion.

In this manner we were finally able to reach agreement on an Interim Constitution in December 1993 and to hold our first universal democratic elections on 27 April 1994. We succeeded with our goal of changing South Africa forever. We established a genuine non-racial constitutional democracy that has served South Africa well to this day.

In the process we learned that new and better realities are created not only by what we do – but, just as importantly, by how we communicate.