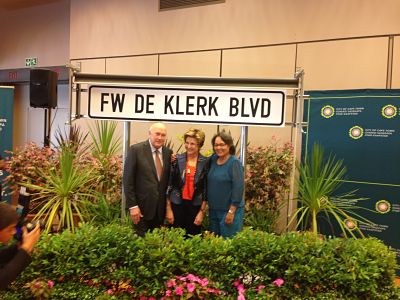 I would like to thank you all for the great honour that you have bestowed upon me by deciding to rename Table Bay Boulevard in my honour. I should particularly like to thank the individuals who launched this initiative and who succeeded in securing the support of so many prominent Capetonians – including our Premier and Archbishop Tutu.

As I have said before, this was not an honour that I sought. I was also not at all sure that places and streets should be renamed after living people – and particularly after living former politicians!

However, I have changed my views on this question.

I see this honour – not in the first place as a tribute to me – but as an acknowledgement of the contribution that so many parties, institutions and people made to the creation of our new non-racial constitutional democracy.

It is essential that we should counteract the efforts of some political factions to rewrite history and to create the impression that our new society was the creation of only the ANC. Anyone who was present at the constitutional negotiations during the early 90s will realise how untrue this is – and how central the contribution of all the participating parties was to the success of our process.

The contribution of my supporters was essential. Had they voted ‘no’ in the referendum of March 1992, the negotiations would have come to a grinding halt and South Africa would once again have been set on the downward road to conflict and economic catastrophe.

The fact that 69% of white South Africans voted ‘yes’ in the referendum bore the most eloquent testimony to their courage and their determination to help to build a new society based on non-racialism and justice. They deserve to be honoured.

The contribution of the Inkatha Freedom Party was equally important. The IFP had to endure much of the trauma of the armed struggle that was unleashed against them in KwaZulu-Natal and in the then southern Transvaal. Had they not agreed – at the last moment – to participate in the 1994 election, it is not at all sure that the process would have enjoyed the universal legitimacy and acclaim that it subsequently received.

Other parties – particularly the Democratic Party – played essential roles behind the scenes in helping to negotiate what is now acknowledged as one of the best Constitutions and Bills of Rights in the world.

Finally, the people of Cape Town and the Western Cape also deserve to be acknowledged. The fact is that in the 1994 national election and in the subsequent municipal elections my party won far more votes in the Western Cape than any other party. People who supported us in the Cape were also voting for transformation – but for transformation based on non-domination by any racial or political group. They were not voting for the imposition on the Cape of racial quotas based on national demographics.

All the voters and parties that helped to create our new society deserve recognition and honour for the roles that they played in those critical years.

It is now a matter of great concern that the local representatives of the ANC have chosen to denigrate the other parties that helped to create our new society. In rejecting the honour that the City has bestowed upon me, they are actually turning their back on all the voters who supported me when I was an active politician.

I believe that they are also repudiating the great tradition of reconciliation and nation-building that was personified by Nelson Mandela. I have no doubt that he would have been deeply shocked and disappointed by their behaviour.

Their leader in this Council has said that “The phase of reconciliation that brought together fair-minded white and black people is over. We are now engaged in a struggle for economic and social justice.”

He was – without calling it by name – referring to the radical implementation of the second phase of the ANC’s National Democratic Revolution, which is postulated on the end of reconciliation and the commencement of increasing racial confrontation.

His approach is yet another indication of the degree to which those in the ANC, who think like him, have abandoned the National Development Plan – a core element of which is the promotion of national unity.

It is another illustration of the “new, bitter and confrontational tone in the national discourse” to which I referred in my speech on Tuesday and which is the antithesis of everything for which Nelson Mandela worked during his Presidency.

I hope that when South Africans drive down FW de Klerk Boulevard in the future, they will not remember me, but will remember that remarkable period in our history when all South Africans came together under the leadership of Nelson Mandela, FW de Klerk, Mangosuthu Buthelezi, Zac de Beer, Colin Eglin and many others to build a new and much better society.  I hope that they will see it as a highway to reconciliation and to the values on which our Constitution is based.

Those who have turned their backs on reconciliation and national unity have embarked along a different road that leads to a very different destination: they are headed toward the unfinished portion of the elevated highway that leads into the abyss.