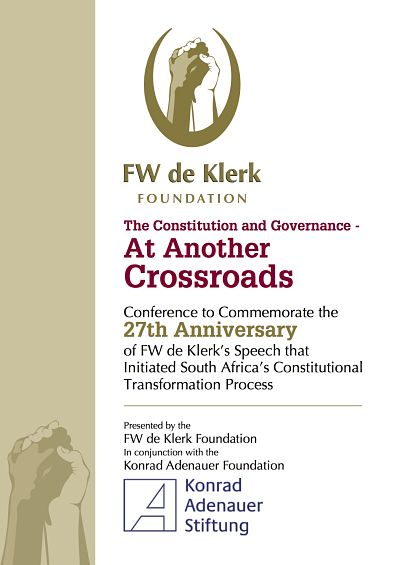 “On 2 February 1990 Mr De Klerk stood up in Parliament to make a speech. It should have been an ordinary speech, it should have been a runof-the-mill speech in which President De Klerk would be espousing the policies of the National Party. But instead, in that speech he turned on its head 500 years of history. The speech included announcements such as the unbanning of the African National Congress, as well as the announcement that Nelson Mandela would be released from prison. The speech in essence established President De Klerk’s (as he was then) vision for a new, improved and better society. In 1990, South Africa was isolated globally, on the virtual brink of bankruptcy and was largely operating outside any accepted definitions of the Rule of Law. Fast-forward to today in 2017 – 27 years after President De Klerk gave that monumental speech – and South Africa is fundamentally a different society. A different society for the better, I might add. However, there are certain concerns that remain.”  – Welcoming remarks by Ms Phephelaphi Dube, Director of the Foundation’s Centre for Constitutional Rights

THE CONSTITUTION AND GOVERNANCE - AT ANOTHER CROSSROADS?