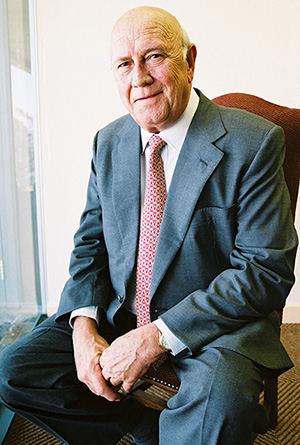 During his presidency from September 1989 until May 1994, FW de Klerk dismantled apartheid and initiated and presided over the inclusive negotiations that led to the adoption of South Africa’s first fully democratic Constitution in December 1993. Also in 1993, together with Nelson Mandela, he was awarded the Nobel Peace Prize. After the election on 27 April 1994, Mr De Klerk served as one of South Africa’s two Executive Deputy Presidents until 1996, when his party withdrew from the Government of National Unity. He retired from active politics in September 1997. In 1999 he published his autobiography, “The Last Trek – A New Beginning” and established the FW de Klerk Foundation.

The Foundation upholds the Constitution through the work of its Centre for Constitutional Rights and promotes unity in diversity by working for cordial inter-community relations and national unity. Mr De Klerk is also the Chairman of the Global Leadership Foundation, established in 2004, whose panel of former presidents, prime minsters and statesmen provides discreet advice to heads of government on issues that concern them.

Click here to view more photos in our Photo Archive.