ANC leaders, can – and do – say whatever they like about the pre-1994 South Africa. From time to time – and however politically incorrect it might be – we should perhaps stop and consider what actually happened.

During the early 80s there was in fact a substantial change in the approach to black education – including a commitment to parity and uniformity in standards and facilities. The reforms were largely prompted by the commission of experts under the leadership of Prof JP de Lange, rector of the Rand Afrikaans University, appointed by the government in 1980 to conduct an in-depth investigation into all aspects of education in South Africa. The Commission’s main report, based on the research work of 18 committees and released in October 1981, was generally regarded as a blueprint for a new deal in education – even though it continued to be based on the unacceptable premise of segregated systems.

In November 1983, the Government accepted most of the Commission’s recommendations. In terms of the National Policy for General Education Act (Act 76 of 1984), the Department of National Education was required to lay down a uniform education policy in respect of norms and standards for syllabuses, examinations, certification of qualifications, running and capital costs of facilities, and salaries and conditions of employment of teaching staff.

The approach was based on the following principles:

Policy was formulated in consultation with several advisory bodies and education departments. The advisory bodies included the South African Council for Education which was appointed in October 1985. It made provision for educationists from all population groups to take joint decisions on syllabuses, examinations, conditions of service for teachers; and financing policy in primary and secondary education.

This process led to some substantial reforms.

From all of this it emerges that there was, in fact, substantial progress (but never enough) in improving black education – particularly in the period following 1980. The achievement should also be considered against the high levels of unrest among youth during the 1980s – motivated by the slogan “liberation first – education second”.

Does our Deputy President really believe that Prof De Lange – and all those who worked so hard to improve black educational outcomes during the 1980s – were motivated by malevolence? 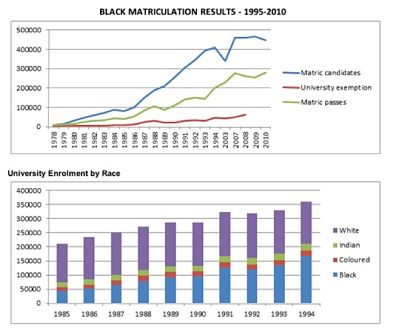 BACK TO SCHOOL, MR DEPUTY-PRESIDENT?