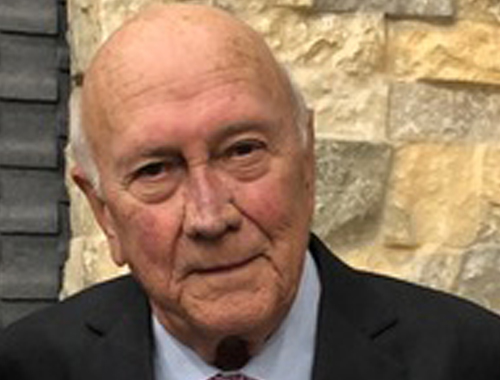 Frederik Willem (FW) de Klerk was born in Johannesburg on 18 March 1936, the son of Senator Jan De Klerk, a senior Cabinet Minister. His school years were spent mainly in Krugersdorp, where he matriculated at Monument High School.

On 2 February 1989, the caucus of the National Party chose him as the national Leader of the Party. On 15 August 1989, after the resignation of President PW Botha, Mr De Klerk became Acting State President, and after the general election of 6 September, was inaugurated as State President on 20 September 1989.

Mr De Klerk served as State President until President Nelson Mandela’s inauguration on 10 May 1994. During this period he initiated and presided over the inclusive negotiations that led to the dismantling of apartheid and the adoption of South Africa’s first fully democratic constitution in December 1993.

After leading the National Party to the second place in South Africa’s first fully representative general election of 27 April 1994, Mr De Klerk was inaugurated as one of South Africa’s two Executive Deputy Presidents – together with Mr Thabo Mbeki.
In July 1993, together with Mr Nelson Mandela, Mr De Klerk received the Philadelphia Peace Prize and on 10 December the same year was the co­recipient, also with Nelson Mandela, of the Nobel Peace Prize.

In January 1999 Mr De Klerk published his autobiography “The Last Trek – a New Beginning” (Macmillan) and the same year established the FW de Klerk Foundation, which is dedicated to the upholding the South African Constitution, promotion of peace in multi-communal societies as well as preservation of FW de Klerk’s presidential heritage and South Africa’s constitutional transformation from apartheid to a non-racial constitutional democracy.

In 2004, Mr De Klerk brought together a number of respected former national leaders to join him as founding members of GLF Global Leadership Foundation, a non-profit organisation that aims to play a constructive role in the promotion of peace, democracy and development in countries across the world.

Throughout Mr De Klerk made numerous speeches around the world and actively participated as an elder and respected statesman in international conferences on the promotion of harmonious relations in multi-communal societies, the future of Africa and South Africa and the challenges facing the world during the new millennium.

In 2020 FW de Klerk was diagnosed with mesothelioma – a cancer that attacks the lining of the lungs. After a courageous battle against the disease, he passed away on 11 November 2021.

Up until the time of his death he lived in Fresnaye, Cape Town. He enjoyed reading, the outdoor life and golf as well as spending time with his family.